We’ve said it before, and we’ll say it again – there’s never a dull moment at NRF (except perhaps when queuing to get passes…).  Having taken a booth for the first time this year – #1362, thanks for asking – has given us an even greater appreciation of the huge amount of effort that goes into the ‘Big Show’ for speakers and exhibitors alike.

With so much going on, it can be hard to know where to focus – luckily we’re here to provide you with an overview of the highlights and dominant themes of this year’s event.  Here’s our key takeaways from Day 1 of NRF 20202 – we’d love to hear yours in the comments or on social!

Opening keynote with @satyanadella @Microsoft tells us that 40 terabytes of data generated every hour in retail. Question is what will you do with it?

As always, part of the joy of NRF is the opportunity to get up close and personal with some of the biggest names in the industry, and the event’s opening Keynote from Satya Nadella didn’t disappoint.  Delivering an inspiring call to arms for ‘Intelligent Retail’, the Microsoft CEO spun a neat turn on an old saying when he noted in today’s world there are only three certainties, ‘Death, Taxes and ever increasing digital advertising spend”.

Speaking on the modern retail relationship to data, the Microsoft leader noted that retailers are now generating up to 40 terabytes of data every hour, with the real question being what on Earth do you do with all this information?  Nadella took a no-nonsense approach, observing that, “data is only useful if you can predict something in real-time,” speaking to a theme that is already emerging as one of the key talking points of this year’s event.

From the CEO of one of the largest tech companies in the world, to the CEO of one of the world’s largest retailers, John Furner (recently named leader at Walmart) was next up on the main stage discussing his approach to staffing in the digital age, with a focus on his time as leader at Sam’s Club.  Speaking to Zeynep Ton, Operations Professor and author of The Good Jobs Strategy, Furner put forward a vision of the modern corporation as beholden not only to the shareholder, but committed to ‘build social and shared value for employees, customers and shareholders’.

While the message of social responsibility would’ve likely resonated in an NRF where brand authenticity is emerging as a dominant theme, Furner also noted that customer complaints at Sam’s Club about things like ‘needing friendlier staff’ were often about more specific needs like ‘the meat department manger’ not being experienced enough.

As champions of the need for increased granularity when it comes to customer feedback, this really resonated as a clear example of why retailers need to evolve beyond simply relying on top-level experience KPIs – for the sake of consumers and staff both.

Another big draw on day one, saw Kohl’s CEO Michelle Gass honored as ‘Visionary’ of the year.  In a wide-ranging conversation with CNBC’s Courtney Reganm, Gass cited Kohl’s focus on thinking differently about stores, particularly with a view on the interplay of retail and digital and its impact on the overall customer experience, as key to its success.  Echoing the the popular sentiment of social responsibility, Gass said that the core of Kohl’s purpose was “to inspire and empower families to lead fulfilled lives”.

Speaking to the existing challenges in the sector, Gass agreed, “we’re all going to have to change, evolve and adapt”.  Perhaps the most visible example of this evolution in Kohl’s recent history, is that of their widely publicised returns partnership with Amazon – which after an initial successful pilot saw a full roll out across all Kohl’s locations in 2019.

While some commentators may be sceptical about whether this drive for increased footfall, has actually had the desired impact on sales (see Kohl’s recent holiday results) from the top down at least, the message was clear – it’s working.

The Best of the Rest

My observation in speaking with multiple major brands today at #NRF2020 : All want more customer data. None know what they’d actually do with it.

My advice: Instead of asking how to get more consumer data, ask what uniquely different and better experience you’d provide with it.

Speaking to the thorny subject of ‘data overkill’, the ‘Retail Prophet’ Doug Stephens neatly captured a widespread issue at the heart of the retail sector’s approach to data – while everyone agrees they want more of it, not everyone seems to know what to do with the data they have.  As the integration of data into day-to-day strategy becomes increasingly common place, it’s hard to see this as a conversation that’s going to fade away anytime soon.  Whether retailers rise to the challenge of understanding data through a CX lens, may soon be cited as the defining difference between future successes and failure both.

It’s so interesting how so many brands and platforms that are speaking at NRF have been launched only in the last 4 years or less…. and are HUGE already #nrf2020 #retail #innovation

Larisa Summers picked up on a less talked about trend at this year’s NRF, noting just how many of brands and platforms showcasing have emerged in just the last four years.  With an increasing number of ‘ecomm challengers’ now investing in their physical footprint – it’s likely that the conflation between online and physical outlets will continue to blur, as we enter a retail world that doesn’t just talk the talk when it comes to ‘omnichannel’ but actually delivers an operating model that supersedes it.  It’s clear that the catalyst for this change is the consumer – and expectations around fluid and convenient customer experiences look like they’re only set to grow.

An inherent conflict at the heart of retail? 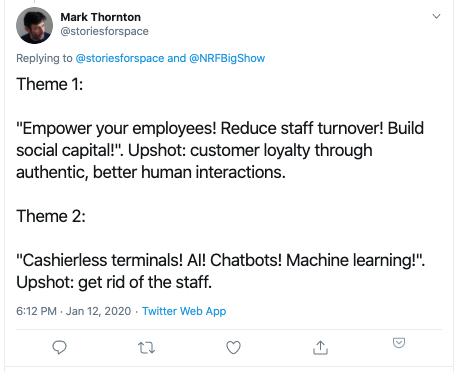 While many of the day’s biggest speakers could be heard evangelising a retail philosophy of positivity and empowerment – on the other side of the hall the loudest calls for action were around continued investment in the technology, or as writer Mark Thornton bluntly put it, an implicit call for automation e.g. ‘get rid of staff’.

For those looking to place a bet on retail’s next ‘existential’ challenge, squaring the peg of how to take advantage of technological advances while maintaining the ‘human’ core of retail, might be a good bet.  At the very heart of all great customer experiences is something uniquely personal, that can not easily be mass produced.  The struggle to find a balance between human-first and tech approaches is going to be a fascinating one to see pan out over the coming years.

Our bet? The retailers who harness tech to support their staff, not replace them, will be the long-term winners. hem – will be the ultimate winners in our Brave New World.

If you’ve made it this far – congratulations.

We’ll be back soon with more highlights form the event, in the meantime, why not come and say hello to the TruRating team at Booth #1362 to learn a little about or next-gen CX solutions.  You never know, it might turn out to be the best thing you do at this year’s event!

Book your slot here, or just swing by the booth at anytime.

View all posts by Daniel Frank